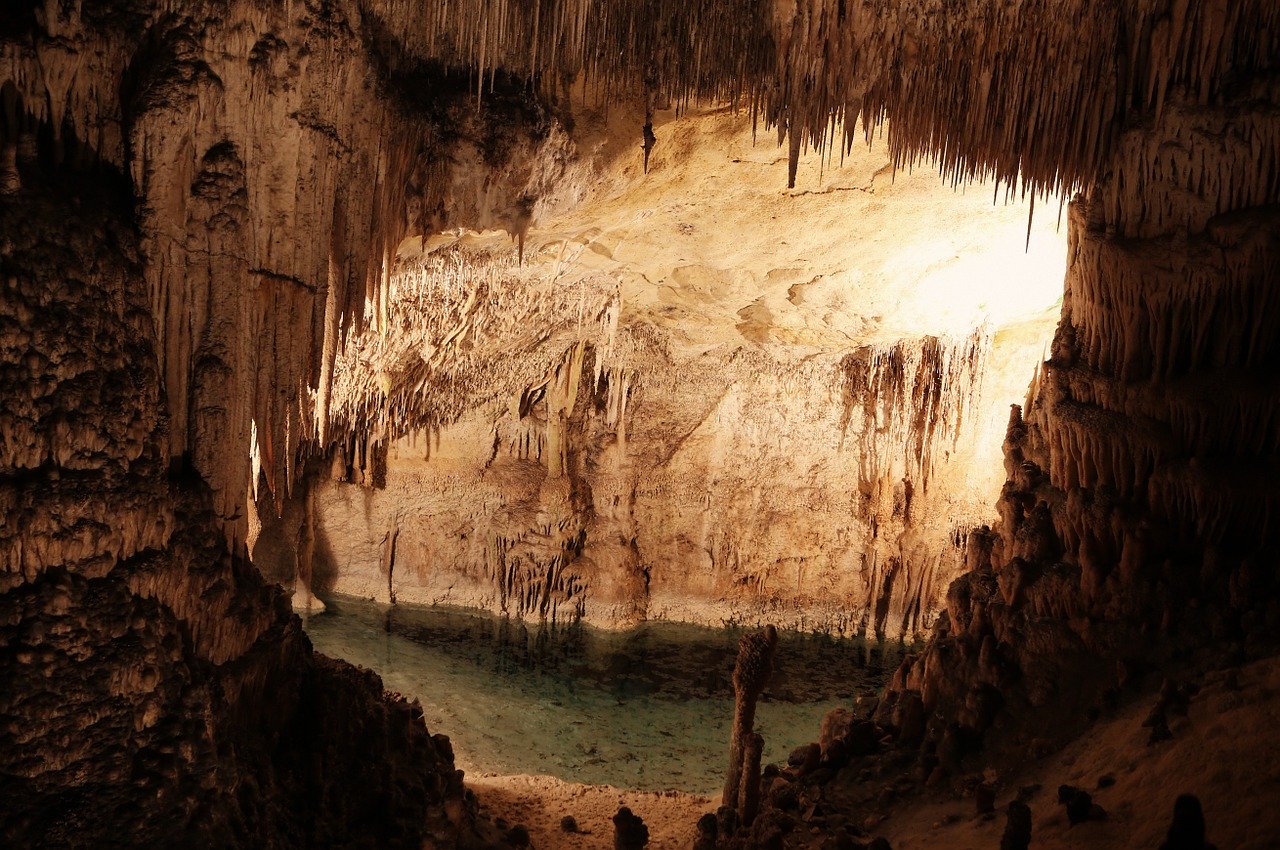 Tennessee has quite a few natural wonders that are commonly known, like the Smoky Mountains. But it wasn’t until we moved here that I learned of the many rivers, lakes, and caves in Tennessee. There is so much around that celebrates natural wonder around the state of Tennessee! Tim and I spent most of our weekends exploring as much of the outdoors as we could. I found out there are 10,000+ known caves in Tennessee and set out on a mission to explore them!

America’s second-largest cave has more than 32 miles of underground passageways, stunning rock formations, waterfalls, and gleaming pools. Located in middle Tennessee, in city of McMinnville, Cumberland Caverns is great for a day of exploring. Make sure you take one of the daily walking tours.

The Lose Sea in the hills of East Tennessee is one of the most visited caving destinations. As impressive as the underground lake is, its history is what really captivated my interest. The caverns were used by the Cherokee Indians and mined by the Confederate soldiers. At The Lost Sea you can enjoy a guided tour of the caverns and a guided boat tour of parts of the lake. During your tour, you’ll learn about the geological formations and development of the cavern rooms.

When it comes to caves in Tennessee, Bell With Cave isn’t the most impressive. The legend behind the cave is what draws you in!

John Bell was a farmer who lived with his wife and children in Robertson County, Tennessee. They lived on a 320-acre farm and their first 13 years on the property were relatively uneventful. In the late summer of 1817, that all changed.

Family members began to see strange animals around the farm and late at night would hear knocking sounds. At first, the noises were outside the house, but over time they started being heard inside the house. The Bell family would hear the sounds of chains being drug across the floors of the house. They would hear stones being dropped, choking sounds, and other strange happenings. The family was scared, but as devout members of their local congregation, they kept the problem to themselves.

When things started to become unbearable for the family, John confided in his neighbor James Johnson. Mr. and Mrs. Johnson spent the night with the Bell family. And after witnessing the strange noises for several nights, it was decided they should tell more people. It wasn’t long before people from miles around were coming to witness the strange and unseen force. Eventually, the force gained a voice and became known as the “Bell’s Witch”.

Another East Tennessee cave worth exploring can be found in Blountville. The Appalachian Caverns have a pretty cool history starting with their first dwellers, Early Woodland Native Americans, more than 1300 years ago. The cave was also inhabited by Daniel Boone and Davy Crockett as American settlers expanded. During the Civil War, it was used by various troops too!

One of the largest caverns in the Smoky Mountains region of Tennessee can be found in Bristol. Bristol Caverns were formed by an ancient river’s rise and flow. In the frontier days, Native Americans would use the underground river as an escape route.

After 200 to 400 million years of the river flowing, it left behind the majestic caverns you can visit. As you walk through the cave you will see geological formations of varying kinds and sizes. Mineral veins in the million-year-old formations give them hues of brown, red, blue, grey, and sparkling white.

Filled with vaulted rooms, stalagmites, stalactites, and other geological formations these caverns are mother natures’ artwork.

While the Great Smoky Mountains National Park brings in over 8 million visitors every year, it is what is beneath them that is really interesting. Tuckaleeche Caverns located in Townsend, Tennessee are known as the “Greatest Site Under the Smokies.” The Smokies are one of the oldest mountain chains in the world! And the caverns are as impressive as they are historic.

Estimated to be between twenty to thirty million years old, these caverns were once home to the Cherokee before they were rediscovered around 1850. The caverns have been open to the public sine 1931 where guests continue to see the Big Room, an area of the caverns that could almost fit a football stadium inside of it, and Silver Falls, that at 210 feet tall is the tallest subterranean waterfall in the Eastern United States.

Ruby Falls is one of the most popular caves in Tennessee. The caverns are part of the Lookout Mountain attractions near Chattanooga and were discovered in 1928. A team of explorers discovered the breathtaking waterfall and in 1930 it was open to the public. The waterfall sits more than 1100 feet below the surface making it the nation’s tallest and deepest underground waterfall that is currently open to the public.

Raccoon Mountain Caverns are located near Ruby Falls and share a little more than geography! During the 1920s, local farmers would sit by the base of the caverns in an area known as Mount Aetna to enjoy the cool air that would blow out of cracks in the limestone rocks. In 1929, a year after his team discovered Ruby Falls, Leo Lambert came to explore the area and look for a cave.

The cave was pristine and Lambert decided to open the cave up to the public as a tourist attraction on June 28, 1931. The Crystal Palace Room, which is believed to be the largest in the cave, captivated Lambert and his love of caves. Years later, another room was found and to date, more than five and a half miles of passageways have been mapped in the cave, with more discoveries still being made. The caverns were originally named Tennessee Caverns then changed to Crystal City Caves followed by Crystal Caverns before taking their current name of Raccoon Mountain Caverns.

One of the coolest things about the caverns is the presence of fossils! As you walk around and take your tour you can see fossils of crinoids, coral, bryozoans, and echinoderms throughout Raccoon Mountain Caverns. There is also a lot of geology that started to create the cave more than 320-360 million years ago!

Just 35 minutes from Gatlingburg, Forbidden Caverns is another one of the caves in Tennessee that the Cherokee lived in. These well-hidden caves provided the Cherokee with shelter and break from the hot sun during summer months. And it was for these same reasons that moonshiners would later use the caverns to distill whiskey and store their contraband.

When Tim and I would lead our moonshine and whiskey history walking tour in Gatlingburg, we would always talk about how moonshiners used the landscape to their advantage. Forbidden Caverns not only has a part in the areas geological history but it also played a part in mountain and moonshine culture.

I’ll admit it, I wasn’t always a fan of rocks. But the caves in Tennessee have such unique histories and stories to tell that it drew me in. When we moved to the state, both Tim and I wanted to spend as much time exploring the outdoors as we could and getting to explore some of the majestic limestone caverns and caves in Tennessee was a really wonderful way to spend our weekends exploring.

The Best Time To Visit Yosemite National Park And What To Expect Every Season
Festive, Cozy, And Unique Christmas Traditions Around The World