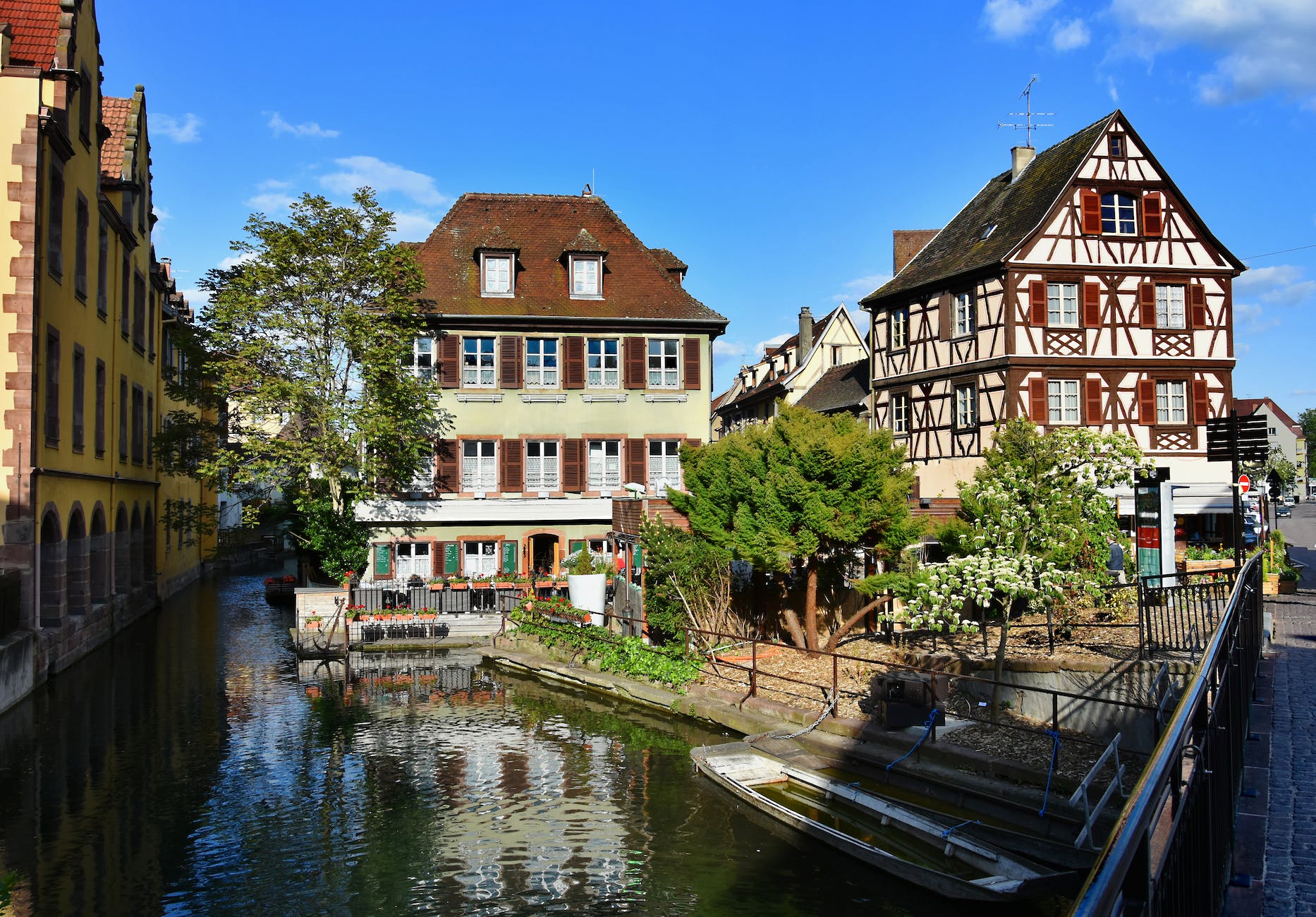 There’s something about medieval towns in Europe that just screams fairytale. I’m not sure if it’s the towering castles or the winding cobblestone streets. It might even be the quaint houses nestled together. Whatever the reason, these towns and villages look like they could be straight out of a book.

If you’re looking for a storybook getaway, you can’t go wrong with any of these European towns. From the picturesque Mont Saint Michel in France to the charming Oviedo in Spain, there’s sure to be a fairytale destination for everyone.

Europe is home to some of the most beautiful and romantic medieval towns, castles, and villages. These historic places are steeped in fascinating stories and legends. And for history and architecture-loving travelers, they are even more alluring!

Mont Saint Michel is a small island commune in Normandy, France. It is located about one kilometer from the country’s northwestern coast. The island has been home to a monastery since the 8th century AD, and it was once a popular pilgrimage site. Today, the monastery is a popular tourist destination, and the island is also home to a small village.

The village of Mont Saint Michel is a picturesque and charming medieval town in Europe, with narrow streets lined with stone houses and shops. The main square is dominated by the Abbey of Mont Saint Michel, a beautiful Gothic building that dates back to the 12th century. The abbey is surrounded by high walls, and visitors can climb to the top of the towers for stunning views of the surrounding countryside.

Nearby attractions include the beaches of Normandy, where visitors can enjoy seaside activities like swimming, sunbathing, and windsurfing. There are also numerous hiking and biking trails in the area.

Prague is one of the most popular medieval towns in Europe and it is easy to see why. The capital city of the Czech Republic is full of medieval architecture, charming cobbled streets, and picturesque bridges. Prague Castle is a must-see. It is one of the largest castles in the world and home to the famous Saint Vitus Cathedral. For those who enjoy outdoor activities, there are plenty of parks and green spaces to explore, as well as river cruises on the Vltava River.

Colmar is a beautiful medieval town located in northeastern France. It is known for its half-timbered houses, cobbled streets, and picturesque canals. The Old Town is a designated UNESCO World Heritage Site and is full of charming cafes and shops. Visitors can also explore the many museums and art galleries or take a boat ride through the canals.

San Gimignano is a medieval town located in the Tuscan region of Italy. It is known for its beautiful architecture, stunning views, and delicious food. The town is home to numerous medieval towers, which were once used to spot enemy troops approaching. Today, these towers are a popular tourist attraction. Visitors can also explore the many shops and restaurants or take a walk through the picturesque streets.

Oviedo is a beautiful medieval town located in northwestern Spain. It is known for its stunning architecture, charming cobbled streets, and picturesque bridges. The town is home to multiple UNESCO World Heritage sites most of which can be found in the old town city center. There are a number of museums to visit and we’re sure that you’ll fall inlove this adorable Spanish town. The city is about a 35-minute drive from Asturias Airport (OVD) and the drive is gorgeous!

Monsanto is a small town in central Portugal that is often referred to as a “fairytale town”. This is one of my favorite medieval towns in Europe! It is home to a castle surrounded by mountains. This is truly a fairytale destination that was the inspiration for the Disney film, “The Sword in the Stone”. In addition to its natural beauty, Monsanto also has a rich history. The town was once an important stronghold during the Portuguese Inquisition. Today, you can still see some of the original inquisition-era buildings, including the prison and torture chamber.

If you’re looking to get away from it all and enjoy some breathtaking scenery, then Monsanto is the perfect place.

Nestled in the stunning Salzkammergut region of Austria, Hallstatt is a fairytale town that will enchant you from the moment you arrive! This picturesque village inspired the popular Disney film Frozen and it’s easy to see why. Hallstatt is a beautiful mountainside destination peppered with pretty houses adorned with flower boxes. It really looks like something straight out of a storybook! It is one of the most picturesque and scenic towns in Europe and has been designated as a UNESCO World Heritage Site.

But Hallstatt is more than just a pretty face – it also has a rich history dating back to the Bronze Age. The town’s oldest building is the 12th-century Catholic church, which overlooks the picturesque Hallstatt lake. For views of the entire town, make sure to take a ride on the Hallstatt Skywalk – a glass-floored platform that juts out from the mountain.

If castles are more your thing, you’re in luck. Hallstatt is home to not one, but two of them! Schloss Ort is a beautiful Baroque palace that was built in 1690, while Burg Hasegg is a medieval castle that dates back to the 13th century. Both are well worth a visit during your stay in this magical town. Today, Hallstatt is a popular tourist destination, with visitors coming from all over the world to admire its beauty.

If you’re looking for a fairytale town that will take your breath away, Hallstatt is definitely worth a visit.

Gruyeres is a small town in Switzerland that is home to a lovely castle, which was built in the 13th century. The castle has been the home of many notable people, including the author of fairytales, Madame d’Aulnoy. And if you think the name sound familiar, you’re right on the cheese! The town is home to a cheese factory, which produces the famous Gruyere cheese.

The town of Rothenburg is located in the German state of Bavaria and is well known for its picturesque medieval appearance. The town was founded in the year 1000 and has a long history, which can be seen in its many well-preserved buildings. One of the most famous landmarks in Rothenburg is the Plassenburg castle, which was built in the 12th century. The castle has a beautiful view of the town and surrounding countryside. Another popular attraction in Rothenburg is the Medieval Crime Museum, which tells the stories of some of the most famous crimes that have taken place in the town.

Siena is a beautiful city in Italy that is known for its medieval architecture and art. The city is home to many notable buildings. The Palazzo Pubblico is a 14th-century building that was the seat of government for the Republic of Siena. The Duomo is a large cathedral that was built in the 12th century and is one of the most important buildings in Siena. The Baptistery is a 13th-century building that is known for its beautiful interior.

If you are looking for a magical and fairytale-like city to visit, Siena should definitely be at the top of your list of medieval towns in Europe to visit!

Carcassonne is a medieval city in southern France that is renowned for its fairytale-like appearance. The city is home to a well-preserved castle that was built in the 12th century. Carcassonne is also home to many museums and galleries, which contain works of art by some of the most famous artists in history. If you are looking for a magical and fairytale-like city to visit, Carcassonne should definitely be at the top of your list!

We all know and love fairytales. They transport us to magical worlds of castles, princesses, and dragons. But did you know that many of these fairytales were inspired by real places? That’s right! There are actually several fairy tale towns located throughout Europe. So if you’re looking for a little magic in your life, be sure to check out these amazing fairy-tale towns!

Tallinn, Estonia is a city that looks like it was pulled straight out of a fairytale. With its towering spires, medieval architecture, and cobbled streets, it’s easy to see why this city has been the inspiration for so many stories! Tallinn is also home to some of the most amazing castles in Europe, Toompea Castle. This imposing 13th-century fortress sits atop a hill in the center of the city and has been the seat of power in Estonia for centuries. Today it houses the country’s parliament.

Another must-see castle in Tallinn is the Kiek in de Kok, which translates to “peek into the kitchen”. This 16th-century artillery tower was once part of the city’s defenses but today it houses a museum where you can learn about the history of Tallinn’s fortifications. If you’re looking for a magical place to visit, Tallinn should definitely be at the top of your list!

Sighișoara is a small town in Romania that is full of history and charm. It is best known for being the birthplace of Vlad III Dracula, also known as Vlad the Impaler. Vlad was a 15th-century prince who was infamous for his cruel methods of torture and execution. The town itself is quite picturesque, with its cobbled streets and medieval buildings. If you’re looking for a fairytale town with a dark past, it’s easy to imagine Vlad stalking the darkened alleyways at night… and Sighișoara is definitely worth a visit.

Edinburgh, Scotland is a city with a long and rich history. It was the capital of Scotland for centuries and is now the seat of the Scottish Parliament. The Old Town of Edinburgh is a UNESCO World Heritage Site, and it’s easy to see why. The streets are lined with beautiful Georgian buildings, and there are plenty of hidden alleyways to explore. The views from Edinburgh Castle are simply stunning, and no visit to the city would be complete without a trip to the top of Calton Hill. If you’re looking for a fairytale medieval town in Europe with plenty of history, Edinburgh should definitely be on your list.

If you’re dreaming of a fairytale getaway, any of these medieval towns in Europe would be perfect! Just picture yourself exploring picturesque streets lined with quaint houses, towering castles perched atop hilltops, or peaceful villages nestled in the countryside!

Exploring The Best National Parks in Canada
Budget Travel Tips: How to Explore the World Affordably