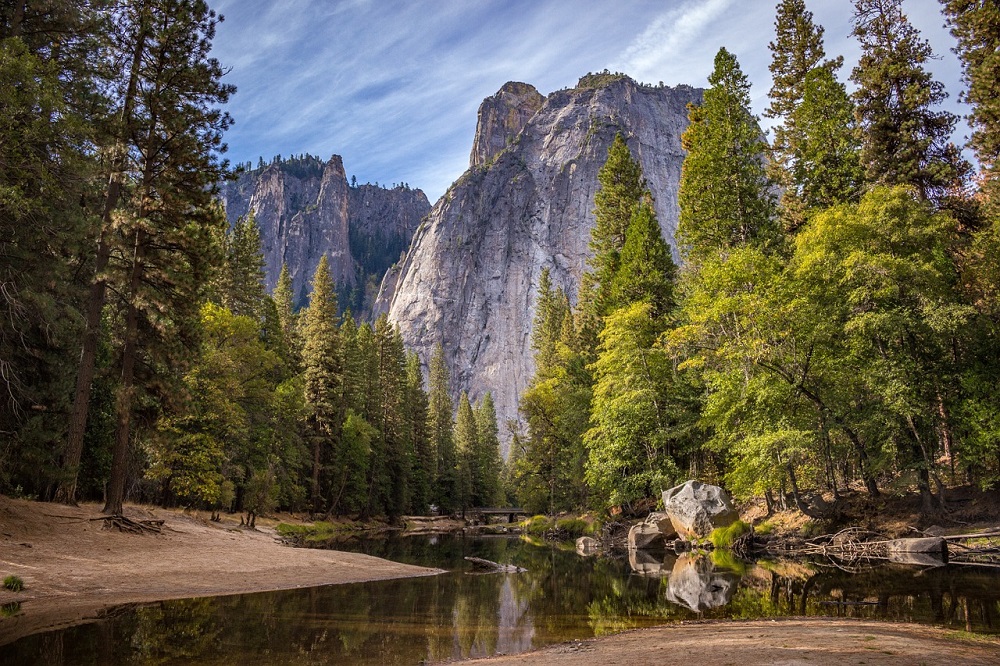 We’re incredibly lucky in the United States to have so many wonderful National Parks to enjoy. Our Nationa Parks System embraces the natural wonders of our country. And one of those that have always captivated is Yosemite National Park. I always recommend spending as much time as possible on our public lands. But if you only have one day in Yosemite, here is how I would spend it!

Yosemite is one of the oldest, largest, and best-known national parks in the United States. You could spend a lifetime exploring this natural wonder, like so many mountain climbers and naturalists have done. Just remember to pack snacks so you can maximize your time.

Tips for a great day trip to Yosemite

Getting there I always recommend taking the scenic route so drive to Yosemite Valley via CA Hwy 140 through Mariposa. It’s a beautiful way to get to the Valley with gorgeous views.

As you make your way into the park, turn onto CA Hwy 41 following the signs marked for Bridalveil Fall. This is one of the most prominent waterfalls in the Yosemite Valley. Just before you reach the tunnel make sure you stop in the parking lot. From the parking lot, you’ll get a great panoramic picture of the valley. You’ll be able to see the icons, El Capitan, Bridalveil Fall, and Half Dome, all in one view.

At the entrance gate, check to see if Glacier Point Road is open. If it is, continue driving along Hwy 41 until you reach the Glacier Point turnoff. The road takes you to a stunning overlook that gives you a breathtaking view of the entire Yosemite Valley.

After seeing what Glacier Point Road has to offer, go back the way you come on Hwy 140, continuing into Yosemite Valley. Head to Bridalveil Fall to see the 188-meter waterfall that flows year-round. You can reach the falls by following the marked trail. It is a relatively short walk and you’ll have some great views of El Captian too!

When you get to the heart of Yosemite Valley, known as Yosemite Village, park your car. You can stop by the visitor center and museum. But truth be told, you’ll want to spend your time outside, enjoying what the park has to offer.

The park’s crown jewel is Yosemite Valley so spend as much time there as you can. I highly recommend spending the money and doing a narrated tour. The two-hour tour is led by park rangers and naturalists so you’ll get all of the park’s highlights while you learn about the park’s history. You’ll also learn about the flora and fauna found throughout the park.

If you’re looking to stretch your legs a bit more, you can rent bicycles and do a self-guided tour. There is also a shuttle that takes you around the east end of the valley. For the shuttle, start at one of the Yosemite Village stops (#1 or #2). At stop #6, you can get a closer look at Yosemite Falls, the highest waterfall in Yosemite National Park that drops a total of 2,425 feet from the top of the upper fall to the base of the lower fall. Yosemite Falls is a major attraction especially in late spring when the falls are at peak flow.

If you have time, I suggest going on a hike. One of my favorite ways to see our public lands are by hiking. You can get off at stop #17 to hike the Mirror Lake Trail or #16 to walk to the Vernal Fall footbridge. Both of the hikes are short and about a mile each way from where the shuttle drops you off.

When you get back to the Village, walk over to the Ahwahnee Hotel. The historic hotel opened in 1927 and is a classic example of National Park Service rustic architecture. The hotel was declared a National Historic Landmark in 1987 and has had a number of famous guests over the years. Some notable guests include Queen Elizabeth II, John F. Kennedy, the Shah of Iran, and Barack Obama as well as Walt Disney, Desi Arnaz, Lucille Ball, Charlie Chaplin, and Judy Garland.

On your way out of the valley, stop by Yosemite Falls if you didn’t earlier in the day. You can climber watch (the park’s version of people watching) at El Capitan Meadow where you’ll probably spot a few climbers on the iconic rock.

How much time you’ll need

I always err on the side of caution in National Parks since they can get busy quickly, especially during peak times like summer vacation. After you reach the park’s entrance, it will take anywhere from 5 to 6 hours to do everything we’ve suggested at a leisurely pace. If you plan on going to Glacier Point, add an hour. And if you choose to do the hikes, add an hour of each trail you do.

Spending one day in Yosemite is a great way to see one of our nation’s most majestic national parks. There is so much to do in the park that you can certainly plan longer trips but if you’re in a pinch and just plan on spending a day in Yosemite, this is a great place to start.

Fauna and Flora: Seeing Wildlife North Carolina State Parks
How To Take Care Of Your Skin To Fight In Flight Dryness