Biltmore Winery: Raising a Glass to the Vanderbilt Wine Club 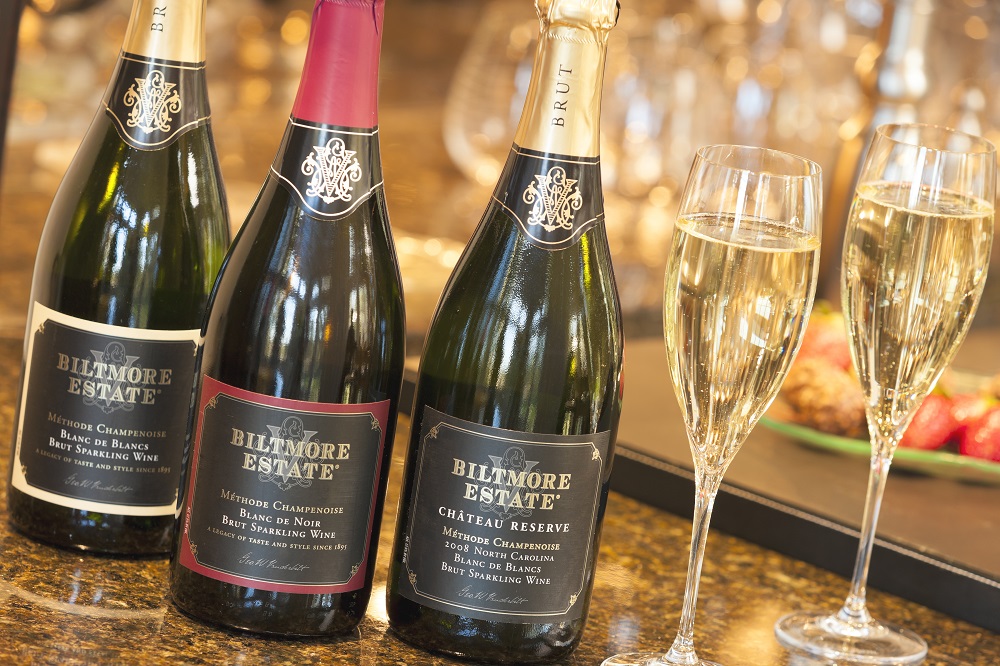 When Tim and I first went to Biltmore last year, we spent most of the day exploring the house and the grounds near the estate. We didn’t make our way over to the Biltmore winery until recently, something I am totally kicking myself in the butt about in retrospect. Insert that bit about hindsight being 20/20 here because the Biltmore winery has since become one of my favorite parts of the estate!

I didn’t have high expectations for the wine or the Biltmore winery, I won’t lie. I just thought it was one of those business expansions to continue making profits for the Estate. And man was I wrong! We recently spent a whole day exploring the Antler Hill Village and Winery where we learned and tasted Biltmore’s impressive wine making history for my 30th birthday.

The Biltmore winery keeps the Vanderbilt tradition of gracious hospitality alive.  The Estate is known for its French influence which doesn’t end with its architecture. The first two winemakers at Biltmore Estate were French and there are plenty of French style wines to enjoy while you spend an afternoon exploring.

“What is more appropriate for a French chateau than a winery?”

Philppe Jourdain, a sixth-generation winemaker who worked directly with George Vanderbilt’s grandson, William A.V. Cecil, to develop the Estate’s wine program. In the 1970’s, as an extension of his grandfather’s vision and legacy of self-sustainability for Biltmore, the idea of wine came to the Estate.

It wasn’t easy at first. With many decades of practice and their fair shares of trials and tribulations, the first challenge the Biltmore winery faced was growing the grapes. In 1971, muscadine grapes were planted and later followed by French-American hybrids but resulted in poor quality. With this experiment having resulted poorly, Cecil turned his attention to Vitis vinifera, the European grape species that experts across the industry were convinced could never grow in North Carolina. He was determined to prove them wrong.

“Telling Biltmore’s owner William A.V. Cecil that ‘it can’t be done,’ is the quickest way to get Mr. Cecil to prove you wrong,” according to Jerry Douglas, President of Biltmore Wines.

At the time, little was known about producing wine in the state on a commercial scale. But Biltmore led the charge for research in the North Carolina wine industry that later benefited other state wineries and wine growers in the area.

While the Biltmore winery had conquered the challenge of growing grapes, demand grew and with it and the Estate had to expand its partnerships with other growers. In the early days of wine-making, most of the grapes used were from North Carolina which limited the estate on how much wine they could produce.

Biltmore faced its next challenge in the form of building a winery where guests could taste and experience the wines the offered by the estate. The historic Biltmore Dairy barn was remodeled into the state-of-the-art winery we see today complete with production facilities, a tasting room, wine bar, and shop. The biggest challenge, however, was overcoming preconceptions of North Carolina wines when popular opinion at the time was that good wines only came from France.

Biltmore winery’s next wine maker was Bernard Delille who followed Jourdain. He was a winemaker in France before he came over to Biltmore as an assistant winemaker in 1986. Unlike Europe, North Carolina was a completely different wine making game- there were no strict rules or rigid standards when it came to North Carolina wine. At the time, Biltmore was making a name for itself as an industry pioneer for the entire state – something that the estate has come to do time and time again throughout history with its innovation.

By partnering  today with growers and winemakers in California, Washington, and North Carolina the estate is able to produce more than 170,000 cases of wine annually, far more than the 50 acres of grapes at the Estate can produce.

Call it dirty or call it flirty, but the truth is that I didn’t feel a whole lot different about hitting the big 3-0 than I did any other birthday. But now that I am  thirty, I want to trade in my solo cups for nice William Sonoma glasses, refine my pallet, and get classy AF. The whole year, knowing that my twenties were coming to an end, I’ve made changes and decisions that reflect a more mature and sophisticated Stephanie. I couldn’t think of any other way to spend my big day than sippin’ wine at the Biltmore winery!

We became annual pass (sounds weird, I know) holders to Biltmore Estate last year when we visited. With our pass expiring in early 2019 and the leaves changing we decided it would be a great time to head over to the Vanderbilt’s and give them a visit. We decided to spend the day exploring a new part of the Estate we hadn’t visited before, Antler Hill Village and the Biltmore Winery. As pass holders we get discounts on a whole bunch of stuff, so when the opportunity arose for us to do behind the scenes winery tour we quickly signed up! 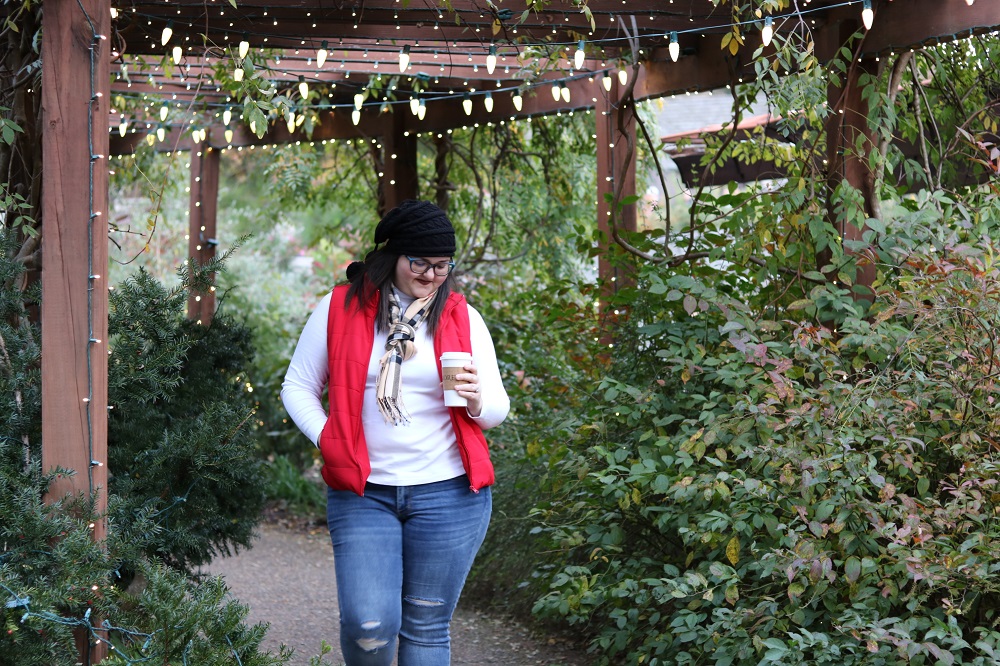 Behind the Scenes at the Winery

We got to see the winery with our guide Daniel and another couple who joined us on the tour. As we walked behind the scenes in the winery, we learned about how red wine differs from white, fermentation, juicing, smashing, and bottling. The tour was so much fun but the ending was a total surprise and my favorite part of our whole visit!

After our tour, Daniel took us to a tasting bar and we were able to try some of the wines we learned about. Since we booked our tour so last minute, Tim and I thought we were just singing up to tour the winery. We had no idea that a tasting was included! As Daniel told us about each wine we tried and went into the flavor profile, we sipped our glasses. 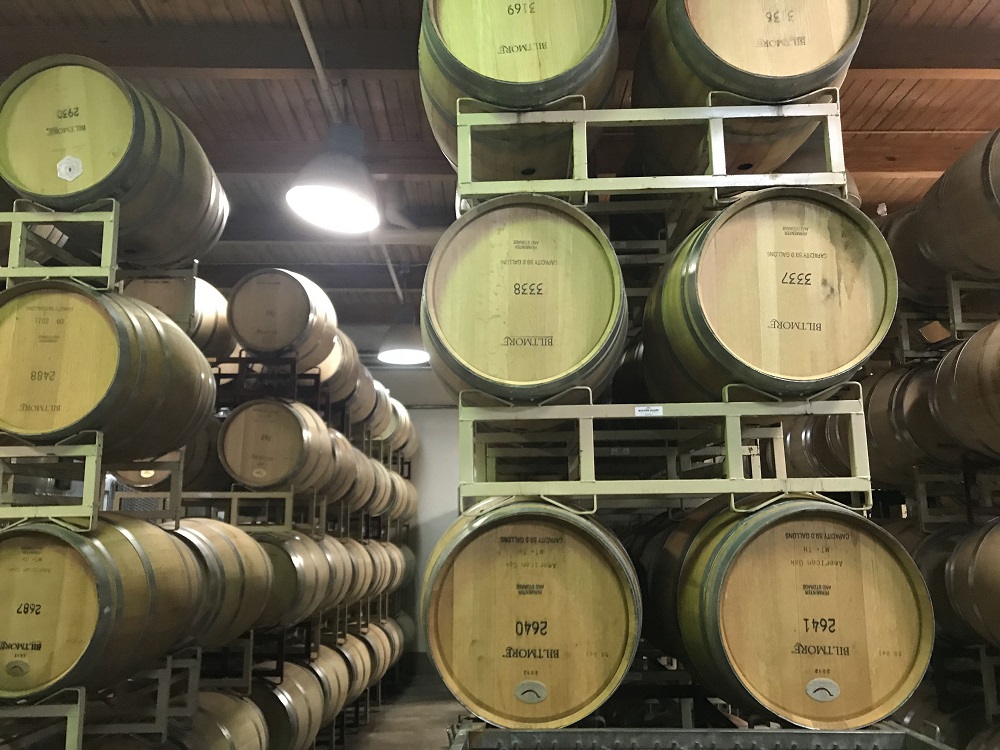 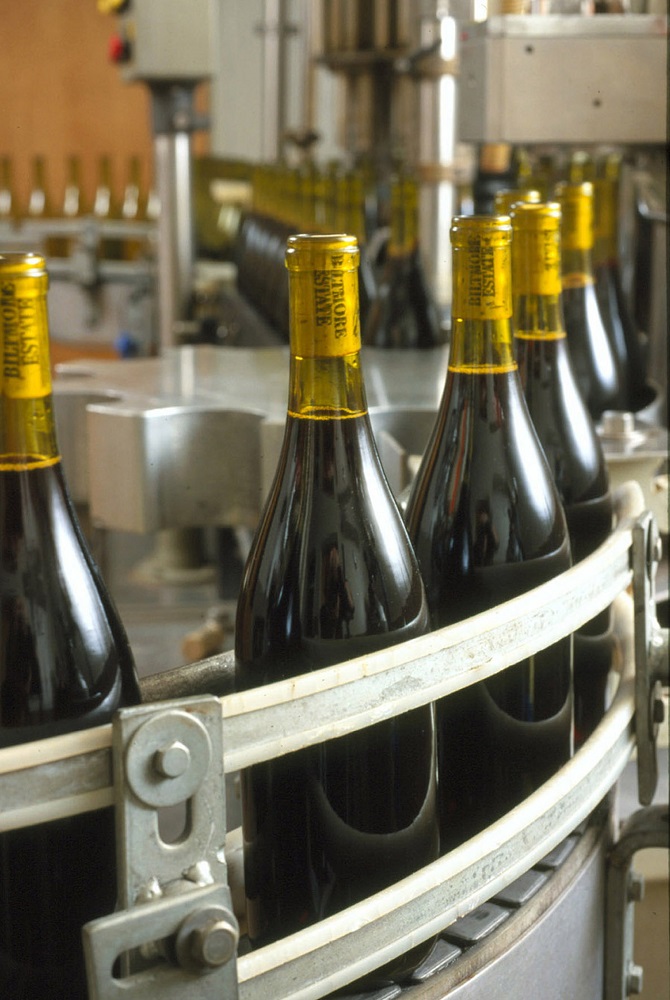 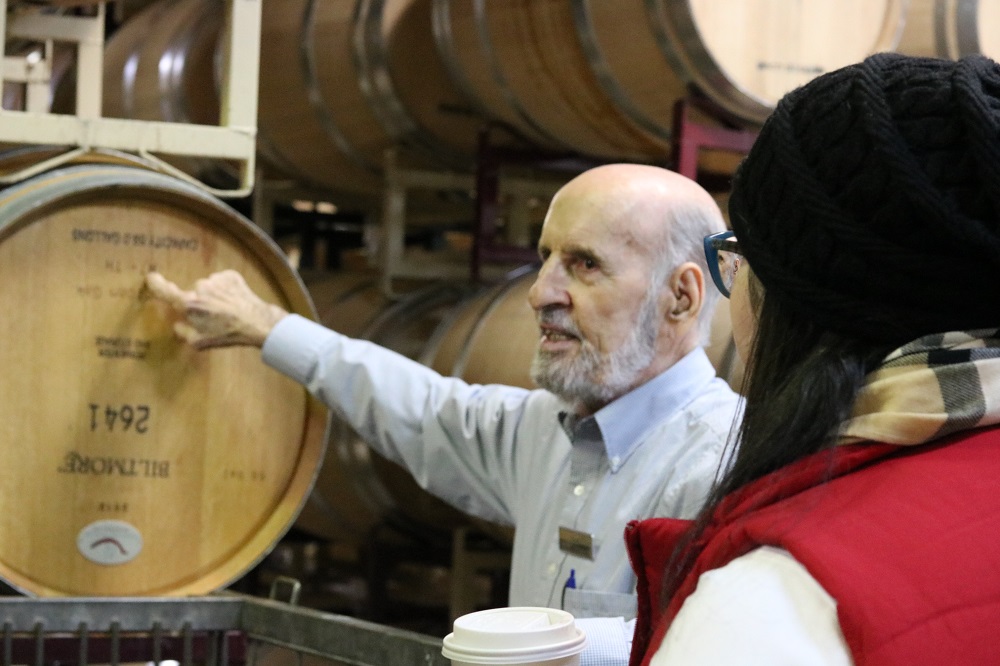 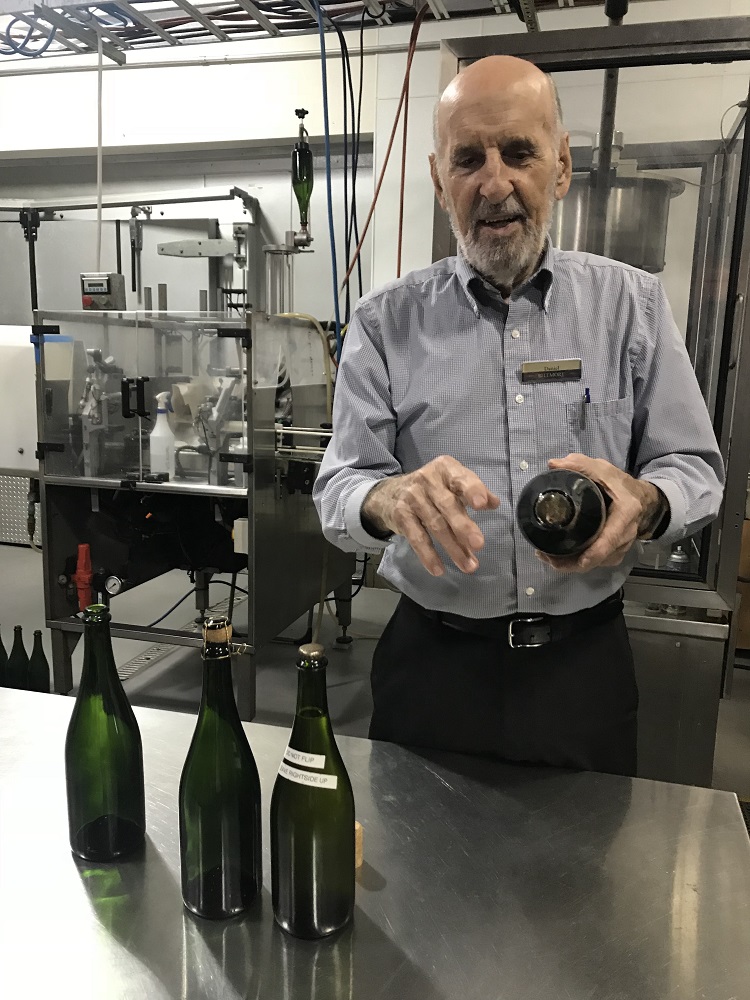 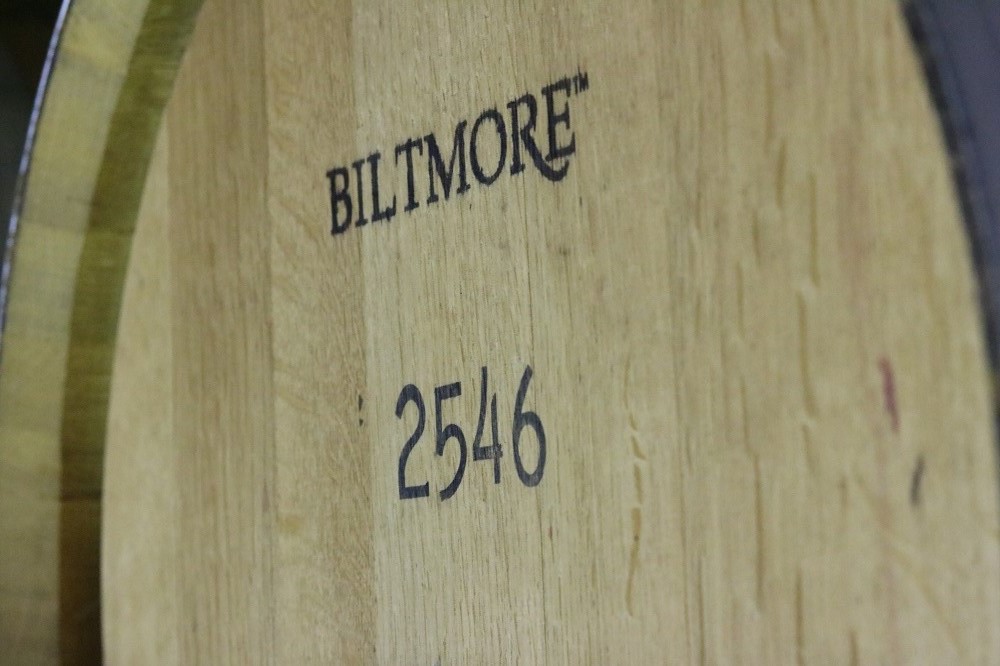 About half way through our tasting the other couple recognized one of the wines as one they are received in their wine club membership box earlier in the year. They spoke so highly of the wines they’ve gotten in their quarterly wine deliveries that it peaked my interest. She mentioned how she was surprised by the quality of wines they send because when you think of Biltmore wine isn’t generally the first thing that comes to mind. But I wasn’t sold just yet.

When we finished our tasting, the other couple went into a wine-club members only lounge. This is what peaked my interest… As a wine club member you get one complimentary glass OR a premium wine tasting of up to 3 wines for you and 3 guests each time you visit the estate! AND you get to sit in a fancy roped off area that says “Wine Club Members Only” like, so bougie. So basically you could go to the winery every day and get free wine. #YasQueen.

What sold me though was how many benefits you get as a wine club member and how their wine club is set up. 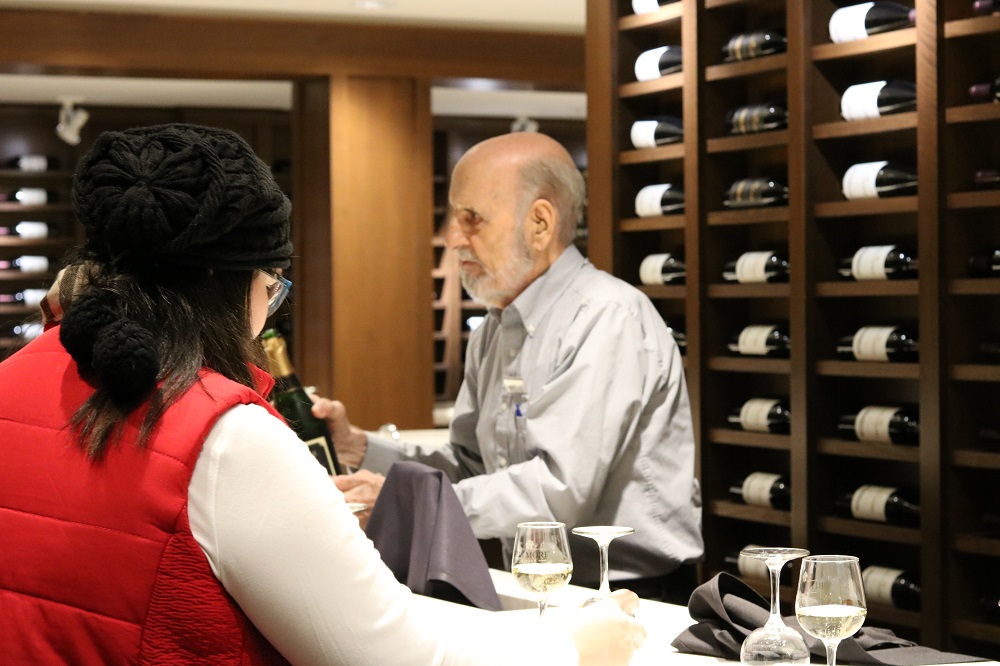 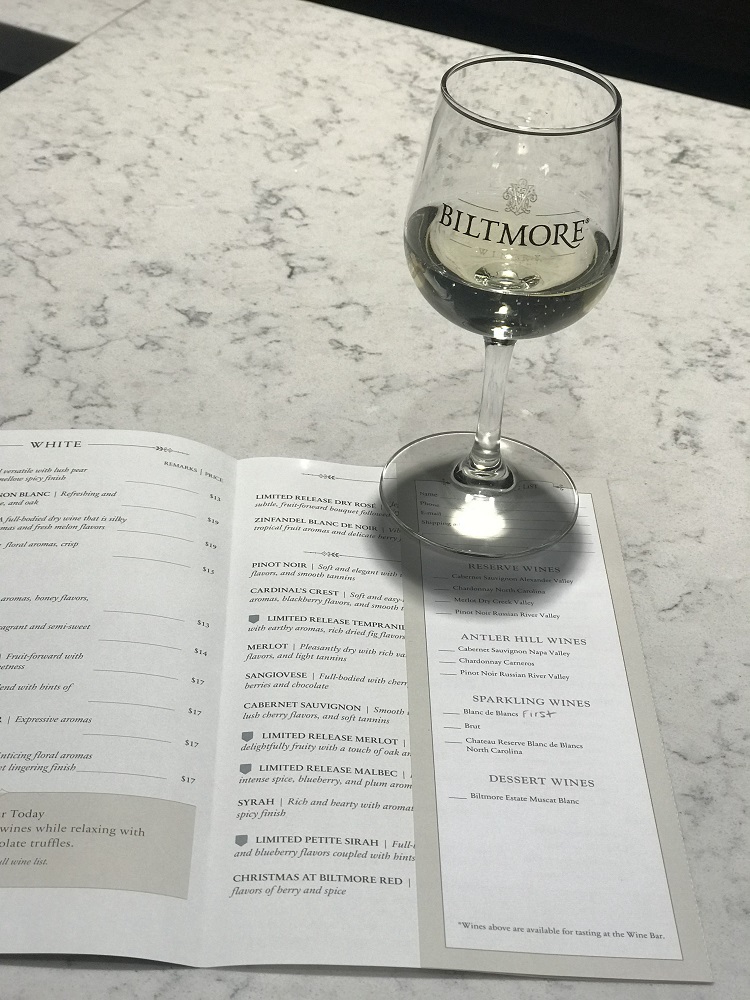 You can sign up online, but since we were already at the estate we signed up at the winery. Signing up was super simple! We filled our our little card, handed over our ID to the cashier at the gift shop and before I could consider changing from reds only to a mix of white and red, we were all set!

Each season you will receive 3 hand-selected Biltmore wines shipped direct to your door. If you live close to the Estate you can also opt for estate pick-up! If you sign up at the winery like we did, you also have the option of getting your wines that same day or having them shipped during the next push which is a great option for those who might be traveling. 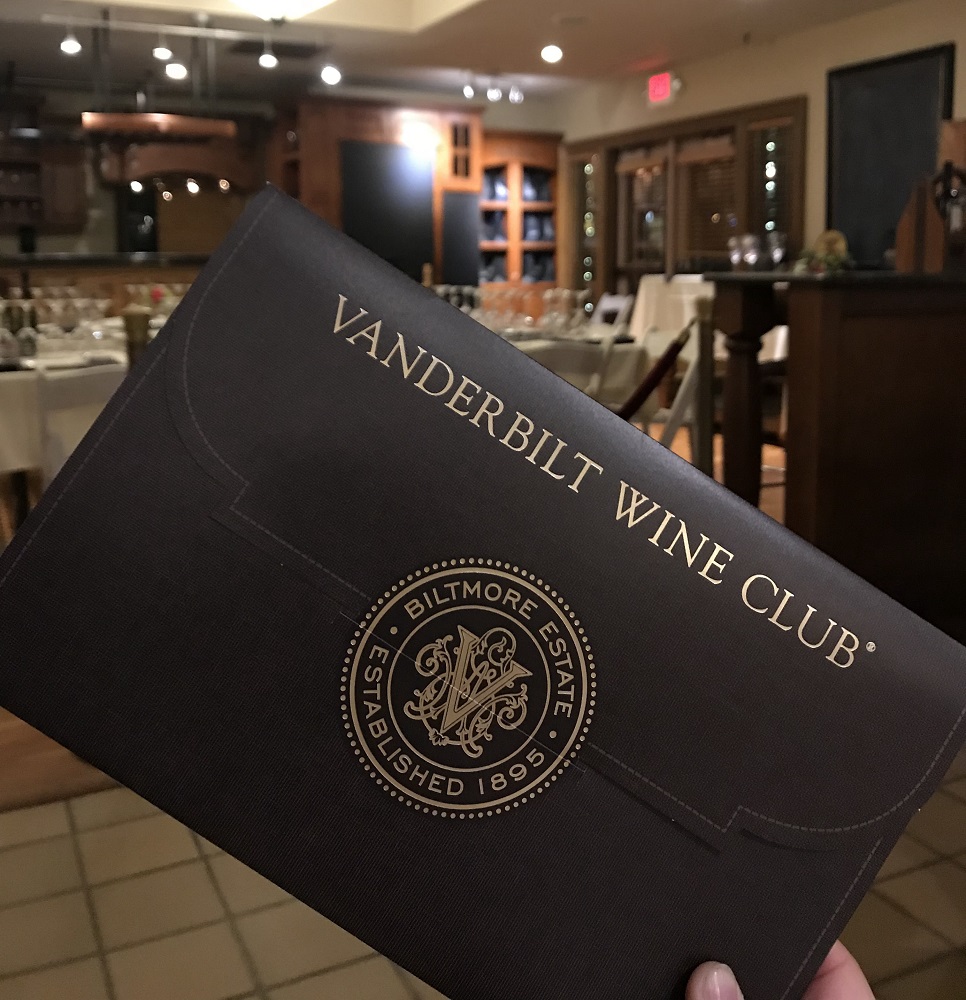 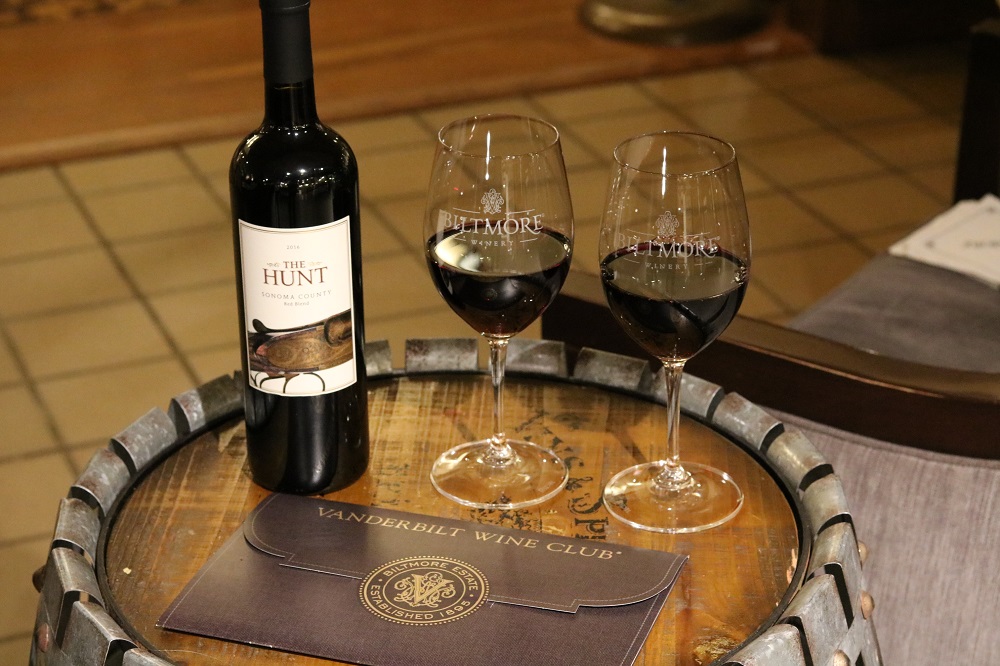 Since Tim and I live over the river and through the mountains from Biltmore, we went home with ours that day. Ain’t no body got time to wait for their wine when they are turning thirty in less than 2 weeks, ya dig?

The benefits are also super awesome, especially when we pair it with our annual pass holders!

Why we love being Vanderbilt Wine Club members

It is a great way to explore Biltmore winery and its selection of wines! We received one in our first shipment that I fell involve with and probably wouldn’t have picked out on my own. I also love the idea of happy mail and nothing says happy like a few bottles of wine showing up at the house!

I think it is really a testament to the winery that each season the bottles selected reflect their passion for distinctive wines, a tradition that started with Biltmore founder George Vanderbilt. With each shipment we are able to uncork conversations with friends, extend our heart and home with those we love, and take part of a Vanderbilt Family legacy without having to don the prestigious name.

Today, Biltmore Winery is the most visited in the United States and offers guests a diverse portfolio of wines that satisfies both those new to the wine world as well as the connoisseur. Biltmore wines are not only award winning, but have a loyal following. “There is an amazing level of trust in our brand and in the relationship our guests have with us, and that’s one of the main reasons we’ve been so successful over the years,” says Jerry Douglas. And for those who can’t visit the winery as often as we can, the wine club is an excellent option for a taste of Biltmore. Tim and I will be picking up our next set of wines this weekend which I am super excited about. 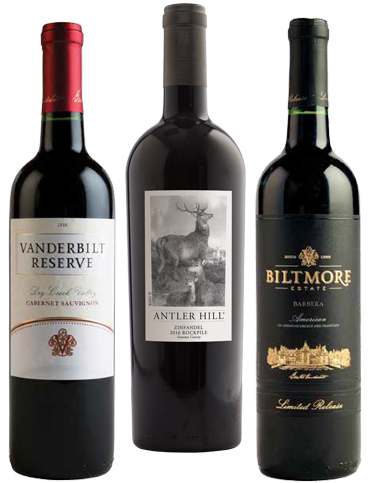 OUR WINTER SELECTIONT WILL INCLUDE:

A Vanderbilt Wine Club membership also makes a great gift! It is a thoughtful, welcome gift for the holidays or special occasions throughout the year. There are a few people on our Christmas list we plan on giving a membership to, so friends and family keep an eye out for your mail man!